Northern lights. 24-hour daylight in the summer. –40°C in the winter.
Gold miners. Dog mushers ... and a FILM FESTIVAL.

Dawson City, Yukon, a town nestled at the confluence of the Yukon and Klondike Rivers on the traditional territory of the Tr’ondëk Hwëch’in. Where young, old, artist, labourer, professional and slacker intermingle — dressed in gumboots, long johns, and parkas.

Among the most northern competitive film festivals in the world, the Dawson City International Short Film Festival (DCISFF) has been showing short films of all genres every Easter weekend since 2000. The festival also includes special events such as master classes with exciting guests, meet and greets, workshops, filmmaking challenges, and awards.

“...a world that succinctly embodies our visions of heaven and hell through its unique combination of hospitable down-hominess and unabashed lunacy.”

The Dawson City International Short Film Festival sprang into action in 2000, as a project of the Klondike Institute of Art and Culture (KIAC) and a few ambitious and creative film enthusiasts from the community. KIAC is an arts centre founded and governed by the Dawson City Arts Society (DCAS) that offers a range of programming; including community courses in visual and performing arts, an arts festival, a print and publishing festival, an art camp for kids, a contemporary art gallery, an artist in residence program and more. 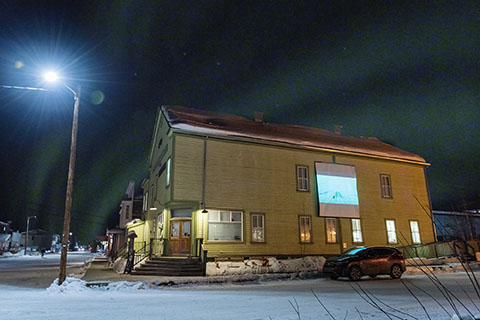 Most recently KIAC was gifted a Hän Language name for our building. The Tr'ondëk Hwëch'in elders council chose the new name, Dënäkär Zho, which means a “house of mixed colours”.